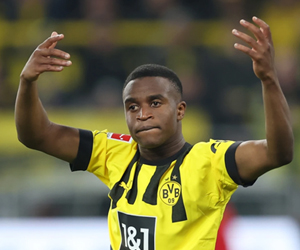 With less than a month remaining, each side is preparing its best squad for the Qatar World Cup, 2022. The humiliating exit in the previous edition of the World Cup hosted by Russia is something that Germans would like to forget about.

To make up for that, Die Mannschaft are seemingly confident in their team under the coaching of Hansi Flick. They have ranked at no. 1 in the qualifying stages of the FIFA World Cup and have a smooth nine out of ten wins. The only setback came against North Macedonia. After 2001, it was the first time when Germany lost a qualifier match.

Flick, who assisted Joachim Löw for years, has released the 44-men provisional list, which packs much of a surprise for football enthusiasts before further trimming down the squad on 10th November.

The list includes a 17-year-old wonderboy Dortmund forward, Youssoufa Moukoko. Moukoko has four goals and three assists in ten appearances in the Bundesliga. Other than this, a bunch of red-hot talents like Borussia Mönchengladbach defender Luca Netz, Union Berlin midfielder Khedira (the brother of Sami Khedira), Werder Bremen’s Füllkrug have made it through the long list.

Germany falls in Group E, along with Costa Rica, Spain and Japan. Germany will kick off their 2022 World Cup journey on 23rd November against Japan at Khalifa International Stadium. Can they secure the title for the fifth time?

Cameroon could miss the services of striker Youssoufa Moukoko who has reportedly been included in Germany’s provisional World Cup squad. The World Cup finals will be televised live on KBC channel one beginning on the 20th of next month. #WorldCupIkoKBC pic.twitter.com/jbbuZKTK4s

With less than a month remaining, each side is preparing its best squad for the Qatar World Cup, 2022. The humiliating exit in the previous edition […]
Do you like it?0
0 Read more