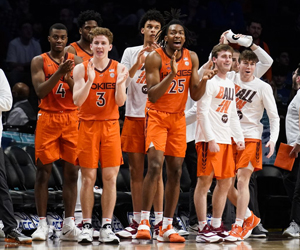 The 68 team field for the 2022 NCAA Tournament is set. Every year, there are some upsets and teams that go further than expected.
Last year was no different.

As you are filling out your brackets for this latest addition of madness, here are my favorite sleeper teams to watch out for.

Virginia Tech
The ACC Tournament champions are only a No. 11 seed, but they are rated 23rd in the nation overall according to KenPom. They are also 18th in adjusted offensive efficiency and sixth in the nation shooting 38.8% from thee-point territory, which makes them a tough matchup for Texas. The Hokies opened up as only a one-point underdog in their first-round matchup and could be a threat to go all the way to the Elite-8.

Vermont
The No. 13 seed in the West Region is 15th in the nation shooting 48.6% from the floor and also strong from three-point range and the free-throw line. Leading the way is a senior duo of Ryan Davis and Ben Shungu, who both average better than 16 ppg, and shot above 41% from three. If Vermont can get past Arkansas, they also have a legit chance to beat the UConn/New Mexico State game-winner.

Loyola Chicago
What list of Cinderalla’s would be complete without the Ramblers? This program went all the way to the Final Four in 2018 as a No. 11 seed and to the Sweet 16 last year as a No. 8 seed. This year, Loyola comes into the tournament as a No.10 seed, but 24 overall according to KenPom. They also rank 10th in the nation shooting 48.9% from the field and eighth hitting 38.8% from three. The Ramblers opened up as a 1.5-point favorite for their first-round matchup against Ohio State and are a team to watch out for.

Richmond Spiders
Since 1985, there have only been five years where no No.12 seeds pulled off an upset, so you should pencil in at least one No.12 to get out of the first round.
If the Spiders can pull off the first-round upset of Iowa, they have a solid chance to get to the Sweet 16. The Spiders are playing well right now and ran the table as the No. 6 seed in the Atlantic-10 Tournament, upsetting VCU, Dayton, and Davidson, to punch an automatic bid. The Spiders have tremendous size and experience and should not be overlooked.

The Bettingoddsforfree.com simulation model, which simulates every College basketball game thousands’ of times, is up +47.65 units over the last three years. We have released 520 total games with 284 WINS and 236 losses ATS for a win % of 54.62%. A $100 bettor of our NCAAB would have netted a profit of $4,765 and, a $1,000 bettor would have won $47,650 just on NCAAB. We have released only a small number of college basketball games so far this season.

The 68 team field for the 2022 NCAA Tournament is set. Every year, there are some upsets and teams that go further than expected. Last […]
Do you like it?0
0 Read more