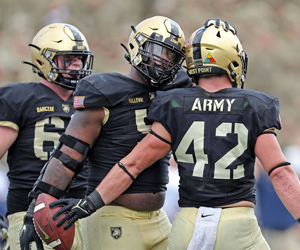 The annual Army Vs. Navy football game is scheduled for December 10 and will be played in Philadelphia. Oddsmakers are expecting a close one here with the Navy Midshipmen a slight 1.5-point favorite over the Army Black Knights.

Getting right into the public and where they are leaning here, Army is taking in 66% of the total bets on the spread.

On the Moneyline though, it is Navy with 63% of the bets. At the 34.5-point total, a whopping 81% of all bets being placed are coming in on the under.

Both teams finished their seasons in similar fashion having both finished under a .500 record. Navy finished at a 4-7 record while Army finish just one game ahead of them at 5-6.

Going back to the history of this game, Navy holds the lead winning 62 matchups compared to the 53 wins that Army has racked up. As for the last ten meetings, Navy has won six of them.

Despite Navy being favored, overall trends do not support them covering the spread or even winning the game. In their last five games overall where they are favored between 2-3 points, 1-3-1 against the spread, and 2-3 S/U.

Overall though this season, they have done a solid 7-4 against the spread and have covered by a 4.7 point margin on average.

Army, on the other hand, has thriven when going into a game as a 2-3 point underdog. In their last six games in that scenario, they are 4-2 both against the spread and on the moneyline.

In the matchup trends, the real money is going to be made betting on the point total, specifically on the under. In their last ten meetings against each other where Army is considered the home team, the under has hit in each of those games.

Going back even further to their last 21 meetings outright, the under is a strong 18-3.

The Bettingoddsforfree.com simulation model, which simulates every College football game thousands’ of times, is up +47.65 units over the last three years. We have released 520 total games with 284 WINS and 236 losses ATS for a win % of 54.62%. A $100 bettor of our NCAAF would have netted a profit of $4,765 and, a $1,000 bettor would have won $47,650 just on NCAAF. We have released only a small number of college football games so far this season

The annual Army Vs. Navy football game is scheduled for December 10 and will be played in Philadelphia. Oddsmakers are expecting a close one here […]
Do you like it?0
0 Read more

The 68 team field for the 2022 NCAA Tournament is set. Every year, there are some upsets and teams that go further than expected. Last […]
Do you like it?0
0 Read more