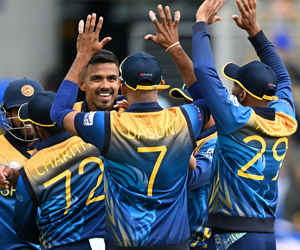 Sri Lanka contested India to snatch the victory in the second match of the ongoing T-20 series on Thursday night in Pune.

Two ferocious fifties by Indian batters Axar Patel and Suryakumar Yadav could not pull the team out of the trough, with Arshdeep Singh’s horrific bowling performance triggering heavy criticism among the fans.

Shanahan remained not out at 56 from 22 balls, including six sixes, whereas Mendis was sent to the pavilion by lbw by Yuzvendra Chahal at 52 of 31 balls. Indian pacer Umral Malik grabbed two wickets, and Axar Patel picked two.

Other than Axar, all others conceded big runs in their stipulated overs. Arshdeep’s 19-run concession in the penultimate over, sent Sri Lanka to a healthy mark of 206 runs.

India was startled from the beginning of the innings and sacrificed five wickets at 57. Ishan Kishan and Shubman Gill, two openers’ early departure from the crease, shook the team. Visitor’s bowler Kasun Rajitha took them both in the second over. After that, debutant Rahul Tripathi and skipper Hardik Pandya left the pitch one by one. Deepak Hooda attempted to fight back with Suryakumar, building a partnership of 23.

Axar and Suryakumar’s sixth-wicket partnership could be the key to their success. But in the 16th over, Suryakumar was caught at long by Wanindu Hasaranga through Dilshan Madhusanka’s full-length ball. Then Axar strived to build a partnership with Shivam Mavi and brought the team to a 21-run final-over-chase. Regardless, in the third ball of the over, Shanaka dismissed Axar to shatter all hopes of Indian fans.

His commendable fight of 65 of 31 went in vain, and India ended 16 runs short of the target.

Now the stage is all set for the series ending on the 7th of January, Saturday night. As the score is levelled 1-1, the winner of the last game will lift the trophy. Fans hope India will overcome all the mistakes that have plunged them into the final match.

GAME DAY!
🇱🇰 and 🇮🇳 face off in decisive third and final T20I from a deadlocked 1-all even keel at Rajkot.

Sri Lanka contested India to snatch the victory in the second match of the ongoing T-20 series on Thursday night in Pune. Two ferocious fifties by […]
Do you like it?0
0 Read more